Arrested in Massachusetts for Disorderly Conduct or Disturbing the Peace?

Under Massachusetts law, if you cause a disturbance which creates a public hazard, and serves no legitimate purpose, you can be charged with a disorderly person offense, also known as disorderly conduct.

According to the statute, a “disorderly person” is defined as one who:

If you are convicted of disorderly conduct, it is punishable by up to 6 months in jail. Generally speaking, this isn’t going to happen. You aren’t really at risk of being sentenced to jail time for disorderly conduct without some serious extenuating circumstances.

A disorderly conduct arrest is usually a discretionary decision by a police officer. If we can show that the officer may have been mistaken and overestimated any potential disorder created, we can get the case dismissed. The prosecution must establish beyond a reasonable doubt that your action created a dangerous situation and served no legitimate purpose. 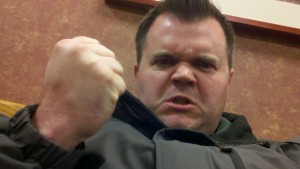 This man is angry. Is he disorderly? Probably not.

Being angry and yelling at someone, even if that person is a police officer, is not sufficient cause to sustain a disorderly conduct charge. You are absolutely permitted to express yourself and your first amendment rights to free speech.

The simple fact is that you are probably more likely to be arrested for a disorderly conduct offense if you personally annoy a police officer. But that doesn’t mean that you are guilty by any means.

Please contact me for details and help on your specific case if you’ve been arrested for disorderly conduct in Massachusetts.

The penalties are incredibly minor for a first offense.

Arrests only generally only happen when you are very annoying to the police, and they want to contain you, or jam you up. There is little to no implicit threat in a disorderly conduct charge, or they would charge you with something more serious.

Section 53. Common night walkers, common street walkers, both male and female, common railers and brawlers, persons who with offensive and disorderly acts or language accost or annoy persons of the opposite sex, lewd, wanton and lascivious persons in speech or behavior, idle and disorderly persons, disturbers of the peace, keepers of noisy and disorderly houses, and persons guilty of indecent exposure may be punished by imprisonment in a jail or house of correction for not more than six months, or by a fine of not more than two hundred dollars, or by both such fine and imprisonment.

Disturbance of Schools or Assemblies – Disturbing the Peace

If you create a disturbance at a school or disturb a lawful assembly of people, the penalties are as follows:

A second offense within a year has a 1-month jail sentence attached, to be served.

Again, this offense of “disturbing the peace” has a very trivial penalty attached, at least for a 1st offense. It is a nuisance charge.

The same penalty as disturbing an assembly of people holds on a “public conveyance”, such as a bus or a train.

If you are being unfairly charged with a silly offense like disorderly conduct, you need someone on your side against the legal system. It is very possibly you are being targeted unfairly by the police.

Penalties for loitering are:

Call me and I’ll offer my experience and advice to you, with no obligation.

Whether an alleged B&E was a mistake, a minor prank, or a premeditated crime, a…

Don't let a Massachusetts Criminal Charge Ruin your Life! Charged with Operating on a Suspended…