Arrested in Massachusetts for Trespassing? Fight Back!

Trespassing may seem like a relatively minor criminal charge, but there can be unfortunate life consequences for anyone who ends up with a permanent criminal record. A criminal conviction will show up on a background check, and  can limit your ability to get many different kinds of jobs. As an experienced criminal attorney, I will help you fight these charges, and give you every opportunity to get the charges dismissed, or beat them at trial. A legal consultation is a wise choice for anyone faced with a criminal arrest and potential prosecution.

As an experienced criminal attorney, I will help you fight these charges, and give you every opportunity to get the charges dismissed, or beat them at trial. A legal consultation is a wise choice for anyone faced with a criminal arrest and potential prosecution.

What Are the Penalties for Trespassing?

According to Massachusetts General Law, a charge of trespassing has the following penalties:

There are a number of defense strategies I can use to successfully beat trespassing charges. There is almost always more to the story then an accidental unauthorized wandering onto public or private property. My tactics depend on the circumstances of the case. 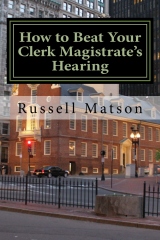 It is not typical to be charged with criminal trespassing unless you are doing so deliberately, such as in the case of a protest.

Again, a trespassing arrest is rare unless you are being willfully disruptive, or the police suspect you of something else or consider you a danger. But very often there is serious police and prosecutorial overreach behind this accusation. So we will have to unpack exactly what is behind this charge to determine the best argument in your defense, to get the charge dismissed.

If you receive a criminal citation to a show cause, or clerk magistrate’s hearing, I wrote a book on tactics for winning cases at these hearings. It is often very possible to make the charge go away at that hearing.

If you’ve been arrested, or there are other charges involved, it can be more complicated, but there are usually a variety of ways to beat the case, and get the charges dismissed. In cases where you want to work out a deal, it’s usually possible to negotiate for a CWOF (Continuance without a finding).

I am in different MA courts every day, defending my clients rights and freedom on charges of criminal trespassing and many other charges. If you’ve been arrested for trespassing or any another criminal charge in Massachusetts, you need someone who will fight for your rights.

By calling, you have nothing to lose. I’ll be happy to talk with you and discuss your case before you decide if you want to hire me. Either way, you’ll get some free advice. Defending people like you who are accused of crimes is what I do for a living. Call to set up a free consultation now. Being accused or charged is not the same as being guilty!

Section 120 Entry upon private property after being forbidden as trespass

“Whoever, without right enters or remains in or upon the dwelling house, buildings, boats or improved or enclosed land, wharf, or pier of another, or enters or remains in a school bus, as defined in section 1 of chapter 90, after having been forbidden so to do by the person who has lawful control of said premises, whether directly or by notice posted thereon … shall be punished by a fine of not more than one hundred dollars or by imprisonment for not more than thirty days or both such fine and imprisonment. “

“Proof that a court has given notice of such a court order to the alleged offender shall be prima facie evidence that the notice requirement of this section has been met.”

Arrested in Massachusetts for Malicious Damage? Malicious damage of personal property is a charge that…